How to Apply: Interested candidates should apply through Online Only.

TNPSC Master 9/24/2015 11:56:00 AM 0 Komentar
CURRENT AFFAIRS CURRENT AFFAIRS- 2015 General Studies TNPSC
1. A panel of chief ministers is seeking additional cess on phone and fuel bills to fund the Centre's Swachh Bharat programme -a move that may increase your tax burden. This is in addition to a radical suggestion to bar people without toilets at home from contesting local body elections.

3. Marathi film `Court' was on Wednesday selected as India's official entry for the Oscars. Filmed on a shoestring budget of `3.5 crore, debutant director Chaitanya Tamhane's film will now represent the country in the Best Foreign Film category at the Academy Awards.

5. India continues to retain its position as the world's top supplier of expatriate doctors to 34 member countries of the Organisation for Economic Co-operation and Development (OECD), followed by China. According to OECD's re cent report on International Migration Outlook (2015), as many as 86,680 Indian expatriate doctors (statistics relate to 2010-11) worked in OECD countries, which in clude the US, EU countries and Switzerland, to name a few.

6. Happy Streets', an initiative promoting a healthy lifestyle and non-motorised transport in the city, has been shortlisted for an award by the ministry of urban development, Government of India, under the category of best non-motorised transport project. Coimbatore city corporation commissioner, K.Vijaya karthikeyan, received a confirmation mail, and he would present the project during the first week of October, in New Delhi.

7. The number of new rich in India will almost double over the next five years, posting the fastest growth of 47%, a latest study says. In comparison, the number of such individuals with a wealth of over $1,00,000 will grow 7% globally and 10% in Asia by 2020, the study says.

Thanks and Reference to: Time of India News Paper 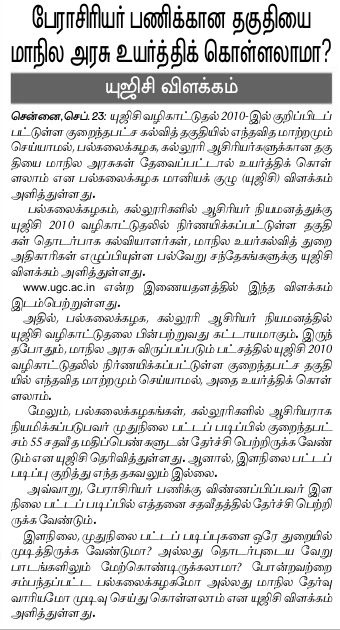 Thanks and Reference to : Thinamani Newspaper